Hopefully in this post, much like the Guzzle Puzzle Helpline, I will find the right words to explain my idea. The idea is something that I tackled before but since then my views have evolved somewhat. The idea – finding a middle ground between representative democracy and technocracy.

Constitutional Monarchy
For over 900 years, the British unitary parliamentary democracy-constitutional monarchy system has held as a steady form of government. The Queen acts as head of state and whilst still retaining certain powers (calling elections, dissolving parlement, etc) must adhire to the law. This is called Rule of Law and it governs every single person, parlement and military, everyone. 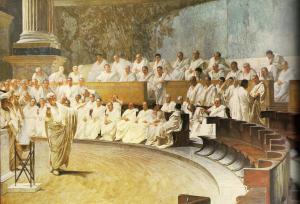 Surviving the Kingdon, Republic and Empire of Rome, the senate is another clearly stable political structure of over 900 years. At it’s core the senate was always a collection of ‘wise men’ giving advice (senatus consultum) to those in power. During republic domain the senate was at it’s most influencial and although their advice had no real authority, it was usually obeyed.

The Idea (Constitutional Technocracy)
To take the three-tier structure of British Parliament, or more directly, Canadian Parliament, change the nature of the House of Lords (Senate) and increase their influence:

The Senate is voted in by anyone with a PhD, those standing for position (representives of fields) must submit their papers and works. This is because, although technocrats have been burocratically designated like in Greece and Italy, real technocrats should be subject to peer review – just like good science. Putting technocrats in influential positions will encourage an intellectual community, bringing foreign science to us. Our science is already on the up-and-up but it would increase enthusiasm in knowledge and reason.
One out there idea is to give control to the Senate in states of emergancy – be it medical (epidemic), military (assassination), economic (crash), etc..

As for the House of Commons, anyone over the age of 18 can vote as long as they pass a standardised political party test. This test is on the policies of parties running in their area. One of the issues I see with democracy is missguided votes squewing the ballot, this precaution would help voters understand the bigger picture. Originally I concieved an Academocracy, but as the comments suggested a large problem with it was disfranchising people. Although again I’m saying not everyone should vote – what I’m really saying is everyone should know why they are voting and what they are voting for. Which is surely reasonable? Hopefully it will also cut down on the tribalism of chosing who your parents or friends vote for, because you will know if you correlate with the party you choose.

House of Lords Reform
My above idea is basically making the House of Lords [seem] more important. The reason I came back to thinking about this issue is a recent proposal in British politics to elect members of the House of Lords democratically. I oppose this notion because of how useful an outside view is, when someone doesn’t have to please constituents or try to stay in power, they are more likely to give an actual view without tribalism.

“The great strength of the Lords is that it contains not just a bunch of experienced retired MPs but a whole raft of individuals with specialist knowledge and experience from the worlds of commerce, medicine, the services, the civil service, academia, the unions – the list is endless – none of whom would be likely to be available to stand for election.”
– Lord Steel, former Alliance leader

7 thoughts on “Marrying Democracy and Technocracy”