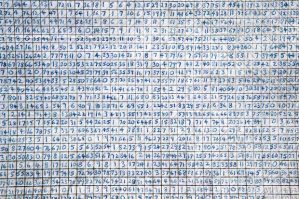 All of Ted’s political writings were in code, a code that was never properly cracked by police – but later finding codesheets like this one gave the necessary instructions for decoding.

Ted Kaczynskib
Known infamously as The Unabomber, Ted was a gifted child. Finding a love for mathematics at a very young age, he went on to get a PhD at Michigan – his thesis on boundary functions was commented on by a member of his dissertation committee saying: “I would guess that maybe 10 or 12 men in the country understood or appreciated it.”, his publications caught the eye of Berkley where he went on to teach. But this great academic life ran parrallel to a social inability, introverted, Ted found solace in himself. As a child he was distant and cold. The only other thing to catch Ted was nature and being outdoors, this would be the basis of his philosophy – personified later when he adopted a survivalist lifestyle in the woods outside of Montana. During his times at Universities he stayed out of all the activism happening at the time showing no signs of strong feelings towards politics.
But then came the attacks and the infamous manifesto…

Kaczynskib believed in a sort of anarcho-primitivism, living for yourself with no technology, and no money. Without a price-system (economy) his view can’t be put into the left-right wing spectrum, but interestingly another system without an economy advocates the opposite – extensive technology use in a collectivist manner:

The Technocracy Technate Design
In short, it is the social movement from the 1930’s related to energy accounting. It’s founders, Howard Scott (engineer) and Marion King Hubbert (geoscientist) created the Technical Alliance which did a range of research projects in energy accounting accross North America. They later founded Technocracy Inc which was where the idea came to fruition. It was popular with the scientifically inclined and thus it’s not suprising that it interested Albeirt Einstien, who met with Technocrats a few times to learn more.

Here are a few interesting differences:

2 thoughts on “Unabomber and the Technocracy Design”